IN MEMORY OF MR. JOSEP VILA, PRESIDENT OF THE SPANISH NATIONAL BUREAU ‘OFESAUTO’ 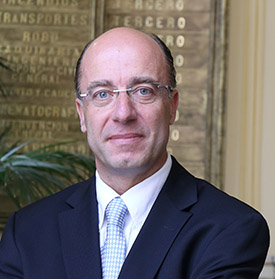 Mr. Josep Vila, CEO of the Spanish Insurance company PLUS ULTRA and current President of OFESAUTO, passed away last Saturday at the young age of 55.

Bachelor in Science (BSc) from the University of Barcelona, he had a Master in Business Administration and Economy from the IESE Business School, complemented with postgrade studies at the Georgia State University (Atlanta), Bentley College (Boston) and the International University of Cataluña, where he was also acting as a teacher.

He was an active member of the board of OFESAUTO from 2000 and he was appointed as President in 2010.

All the family of OFESAUTO, board members and employees are grateful for his contribution. We shall always remember him as a hardworking colleague and more than anything we’ll never forget his extraordinary interpersonal skills. May he rest in peace.